I’ve decided to not participate in NaNoWriMo this year. I’ve seen what it does to people. It’s like the One Ring. It tempts you. Glints, winks, at you. You think you can resist it. Then, before you know it, you’re a skinny, drooling, insane mess, clutching papers and coffee mugs, twitching and giggling to yourself in the corner.

Maybe I’ve been talking to the wrong people.

Anyway, since I’m not partaking in this delightful… event, I’ve decided to instead dedicate a post to my Top Ten Favourite Films of ALL TIME. Runners up will be at the bottom. I’ll talk a little bit about each one, too. Because, y’know, I don’t have ten chapters I should be editing instead.

Released: 2012
Starring: Tony Stark. And some other people. And Tom Hiddleston, obviously.

Arguably the most popular film of all time, The Avengers for years was thought to be an unmakeable film. Enter Joss Whedon, King of the Nerds. Everything about this film screams “awesome”. The casting is perfect, the writing is perfect, the effects are perfect. It’s just fantastic, let’s face it. And if you don’t like it, you’re wrong. I know that’s your opinion, but it’s wrong.

AUTHOR’S NOTE: I’m not a fan of DC, and I loathe Superman as a “hero”, so I find it especially satisfying when SIX heroes do less damage to a city in trying to defend it than Superman causes ALONE. Come on, Supes. Get it together.

Despite Costner’s accent, this film is beautiful. It’s a (fairly) faithful adaptation of all those Robin Hood tales I read growing up. Even satire film Men in Tights pokes loving fun at this one the most, because they know it’s the most popular, and most people will have seen it. And laughed at Costner’s accent. Alright, enough about the accent. But really, he couldn’t have toned down that drawl just a tad?

8) The Winter Witch (US title, The Snow Queen)

I’m not sure how many of you will have seen this particular film. It usually floats around on TV at Christmas time. It’s not particularly well known and wasn’t received very well because of its bad effects and sometimes stilted writing, but it always makes me feel nostalgic and cuddly inside. It’s based on the Hans Christian-Anderson tale The Snow Queen (also the basis of Disney’s Frozen), and it’s very loyal to the source material.

7) Disney’s Beauty and the Beast

What can be said about this film? It’s practically a modern classic. I can’t say much about it, because it’s perfect in every way. If you haven’t seen it, you had no childhood. If you hate it, you have no soul.

Sorry, Mother. I know you really, really, really hate Bowie, but this film is a Jim Henson classic. Yes, it’s very… 80’s. Costumes and music are a little cringe-worthy, effects make CGI artists cry, and Pre-Academy-Award Jennifer Connolly has a long way to go. Still, it’s a classic, and I love it.

Fantastic, original storyline. Excellent effects for the day. A novelisation. What more could a dragon-lover want? Except maybe a better haircut for Einon. Seriously. Get it trimmed. You look like a mushroom. Oh, and the accent, again. C’mon, Quaid, I know Costner did it, but the film is set in Britain. You even say it in the film! Get your accent together.

AUTHOR’S NOTE: The novelisation is, incidentally, a fantastic read, and one of my favourite books.

Released: 2007
Starring: Claire Danes and Charlie Cox. And a lot of other people.

One of the most romantic, heart-warming stories that has ever graced the screen. Neil Gaiman, the author of the novel, is one of my favourite authors. I heard he’s got a cameo on Captain Shakespeare’s ship. Which I find weird, since Captain Shakespeare was barely in the novel at all. Ah, I’m nitpicking. It’s a beautiful film, makes me cry every time, and it has this:

How can you not die laughing?

I think this is the first film I remember watching. Yes, I probably watched some Disney ones first, but I remember this one the most vividly. It screams 80’s all over it. Had this been made in 2014, it would already have two-dozen sequels lined up, because it was so original and well-made. Also, oddly enough, has a novelisation that expands on Elora Danan’s background, what happened to Sorsha’s father, and why  Madmartigan is such a badass.

*takes deep breath* THIS IS THE MOST FANTASTIC FANTASY FILM THAT FELL OUT OF THE 80’S.
That is all.
No, really. It has everything. True Love. Giants. Fencing. Torture. Miracles. Billy Crystal (yes, you read that right). Rodents of Unusual Size.
See it. SEE IT.

And my absolute favourite film of all time ever is….

Technically not a “film”, it’s a TV mini-series. Still, although I could recite this back to front, I would watch this again. This movie is the reason The Old Ways exists. It fed my love of fantasy. It sparked my interest in the old legends of Britain. Many people criticize its bad effects, and yes they are very bad, but everything else makes up for it. Miranda Richardson as Queen Mab and the Lady of the Lake, Sam Neill as the titular Merlin, Isabella Rossellini as Merlin’s True Love, Nimue… if you’re going to watch anything on TV ever again, watch this.

Oh, and if you’re thinking of watching the 2006 sequel, Merlin’s Apprentice… don’t.

AUTHOR’S NOTE: Also has a novelisation, in three seperate books. Merlin: The Old Magic, Merlin: The King’s Wizard, and Merlin: The End of Magic. They’re my favourite. I cuddle them when no one is looking.

EDIT: Er, I don’t actually do that. 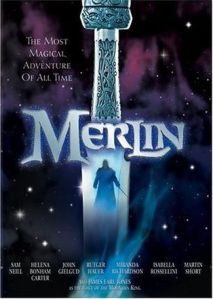 Alright, that’s enough gushing about Merlin. Here are the runners up, in no particular order:

The Spiderwick Chronicles
The Brothers Grimm
Inkheart
Frozen
Tinker Bell and the Pirate Fairy (don’t judge me. It has Tom Hiddleston in it. Singing. *swoon*)
Corpse Bride
Ladyhawke
Legend
The Mask of Zorro
Elf