Okay, so I’ve been a bit quiet lately.  In my defence, I’ve been on holiday. And I’ve been editing until my fingers bled. Slight exaggeration there.

I also overdosed on Scottish butter tablet. Mmm it’s like a sugar cube but edible. I ate a whole box in one go. Recipe is here, by the way!

Returned to day-job after two week holiday to find my desk in a complete shambles. A total pigsty. It was a mess. Crisp packets, Coke cans, sweetie wrappers… vile creatures, leaving my desk like that.

How are we all finding Capaldi-Doctor? I like him. He’s like a grumpy grandad. Moffat, on the other hand… *sigh* what can be said?

My nightmares for the next two years. That’s what was on the bed.

My friend tried to console me. “It was just a kid playing a joke,” she said, “there wasn’t a monster, really.” Didn’t stop me from being terrified though, did it?

I can’t stop looking at it. Why did I think it would be a good idea to put that screenshot there? It’s looking at me. Make it stop. Quick! Distraction! 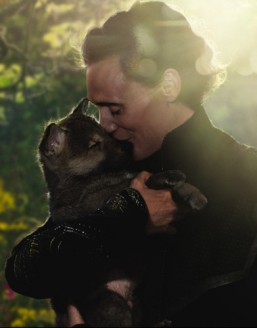 Ahhh, much better. Tom Hiddleston and a puppy…

In other news, the release date for my novel has been decided! Well, sort of. We’re hoping for a release before October 2015. Which means I’d better shift my cute little butt and get editing! Only… *mentally counts* twenty-six more chapters to go! 😀

And then, of course, there’s Dragon Age: Inquisition. The release date has been announced as 7th October 2014. Excuse me a moment.

Thank you. It escapes every so often. Worse when I’m in public. Oh! And Sleepy Hollow starts on Monday. And Grimm comes back on 24th October. Aaaand I’ve started watching Supernatural from the beginning.

I’d better go before I babble myself into complete insanity… *snort* I’m way too late for that. I’ve been here a while. With those rooms made of mattresses and those comfy-looking hug-jackets.