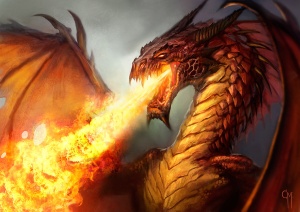 I once had a dream where I was riding a dragon.

This is fairly normal for me, as you can imagine. But this one time when I was riding my dragon through the night air (escaping something, if I remember correctly), I remember exactly how it felt. And the sensation was beyond magnificent.

The lurching, the swaying, the feeling that the ground was so far away. The sweep of enormous wings underneath my legs like sails. The air rushing past, not warm, not cold. I felt the currents of the wind carrying us through the night. And the roar. Oh… It was glorious. Majesty and might in one earth-shaking thunderous noise.

Was this the most vivid dream I’d ever experienced? Or did I own a pet dragon in another life and this was just a memory? I’m hoping for the latter.

Dragons are probably the best known magical creatures in media. Literature, movies, games, music, dragons have left their claw-marks on the collective hive-mind of fantasy fans. Often the symbol of kings and great heroes, dragons can be beautiful, terrifying, powerful, and dangerous.

One thing we need to address first and foremost:

Dragons have four legs and wings. Wyverns have two legs and two wings.

The dragons of Skyrim, Game of Thrones, and Harry Potter, are wyverns. The dragons of Dragon Age, Dragonheart, and How to Train Your Dragon, are Dragons. (Well, mostly; I’ve noticed a few wyverns sneaking in HTTYD)

I imagine one isn’t really interested in counting legs when one is on FIRE.

King Arthur’s surname means “chief dragon”. Fitting for the Once and Future King. England’s patron saint, St George is famous for slaying a dragon. A popular folk tale where I live tells of the Lambton Worm, a poisonous dragon (or wyrm) so large it wraps itself around a hill and devours livestock.

In France, dragons are used in the stories of Christianity triumphing over Paganism. Dragons symbolise raw, wild, untapped power.

Myths, legends, folklore, even Bible stories are rife with dragons. The Devil himself is often depicted as one in his most powerful form.

Dragons who don’t speak are animalistic, therefore act as animals do. “I am hungry, therefore I shall eat.” Do we begrudge cats killing mice and birds? It’s their nature. It just so happens “birds and mice” to a dragon are “cows and sheep and the occasional human” to us. They don’t know any better, they’re just hungry animals.

Of course, not all dragons are like this. (Yes, I used the phrase #NotAllDragons.) A famous phrase states “Meddle not in the affairs of dragons, for you are crunchy and good with ketchup.” But some dragons, like Draco from Dragonheart, strive to be good and help humanity. 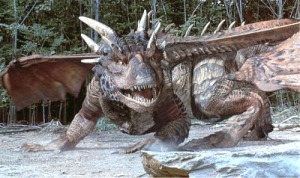 Dragons are wise. They have to be, they’re long-living beings. They can’t live for hundreds, maybe thousands of years, and not accumulate knowledge just as they accumulate wealth. In Braveheart, dragons are shown to save humans in danger. A stark contrast to, say, Smaug, who can’t help noticing how tasty Bilbo looks.

Eregon, book and movie, has an interesting spin on dragons. They imprint on a human (their ‘rider’) upon hatching, can hold telepathic conversations, and share sight with each other. Mushu, from Mulan, remains to this day one of my favourite Eddie Murphy roles. Yes, it’s lighthearted and goofy, but he’s a funny dragon. Who can’t love a funny dragon?

In conclusion, I’m beyond excited to start work on the as-of-yet untitled book three, because I can finally write about dragons, and describe them in all their awesome majesty, and give them all the respect and honour they’re due.