THE FOLLOWING BLOG POST MAY CONTAIN SPOILERS FOR THE OLD WAYS.

PROCEED AT YOUR OWN RISK.

I was  performing extensive research for my novel earlier today, when I found this gem: 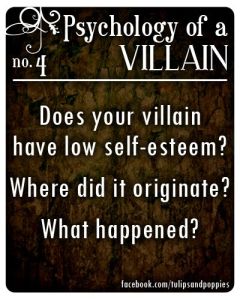 When I first saw it, I laughed. I mean, I laughed hard. Because my immediate thought to myself was, “Of course not, Erlik thinks he’s the best thing ever created!”

Then I went deeper into it. And I realised the whole reason he thinks so, is because he does have low self-esteem. He acts the way he does, because of crippling insecurity. He spends the entire novel hot on Mab’s heels. He swings from one emotion to another in the blink of an eye. He’s often shown drinking heavily (in the morning! What a lush). He’s infamous (in-universe) for his sexual exploits, and has the… *ahem* extensive progeny to prove it.

These can be symptoms of low self-esteem. Addictive, promiscuous, and chaotic personality traits. While he never displays anxiety attacks or a lack of self-confidence, he certainly has something about him that indicates he dislikes himself, and is projecting that dislike upon others to make himself feel better.

Loki has low self-esteem too. Yes, that’s my excuse for using his picture…

So is that what makes a good bad guy? (Okay, okay, I’ll say good villain from now on. Makes for less confusion) Well, I don’t think it is. Erlik has low self-esteem, yes, but he’s also funny, charming, sinister, manipulative, vindictive, and so deliciously wicked.

I… may be a little biased. #TeamErlik

Anyway. Is that what makes a good villain? ‘Nice’ qualities? Human qualities? Well, I don’t think so. I mean, I think they certainly help, but Sauron was a perfect villain, and he had no human qualities at all.

Good villains can be relateable. They can have something in them that makes regular, less-villainous people go “Oh, that’s like me! Wait, is that good?”

What about those villains who know they’re evil? The ones who relish in their darkness. The ones who torture and torment for fun. Lookin’ at you, Ramsay Bolton.

A good villain must be a foil. A contrast to the hero. An opposition to everything the hero stands for. Erlik is a Dark Prince, while Thomas (eventually) is a White Knight. Thomas has a strong moral high ground, whereas Erlik is underhand and plays dirty. Everything Thomas is or becomes, Erlik is ultimately the antithesis. In D&D terms, Thomas is Neutral Good, while Erlik is Chaotic Evil.

That’s what makes a good villain. Next time you’re writing, talk to your villain. Ask him/her/it what they’re fighting for. Ask them what they want. Does that goal conflict with what the hero wants? Do they believe they’re the hero of your story? Talk to them, and find out. Then you’re on the right path.